Here is a story of love and resilience sure to soften the edges in these difficult Covid-stricken times.

Parc Safari, located in Hemmingford, Quebec, in collaboration with The Aspinall Foundation, a UK based charity devoted to the conservation of endangered species, and the Imire Rhino and Wildlife Conservation Preserve in Zimbabwe, have joined forces to re-introduce two of the park’s cheetahs to their natural habitat.

The two brothers, named Kumbe and Jabari, were born in 2019. A few days ago, they began a journey that will take them to Imire, a wildlife protected area in Zimbabwe, where they will contribute to the survival of the species. This is the first time cheetahs, the world’s fastest land animal, are rewilded to Africa from Canada.

Since their arrival in 2013, cheetahs are the pride of Parc Safari and a favorite of visitors. The idea of returning a couple of young males that were born at Parc Safari has been on management’s mind for a while. Confident they had two felines with strong genetics, they went ahead knowing this would bolster the genetic diversity of the wild population.

”We love our animals deeply, and it is hard to let them go, but we know we are contributing to a bigger cause. We are proud of this achievement, and grateful to our many partners, including the government of Zimbabwe. The goal is not only to add captive-bred animals to the local population, but to increase genetic diversity so as to guard against inbreeding. To protect, care and love is our mission”, says Jean-Pierre Ranger, President of Parc Safari.

Kumbe and Jabari are now back in Africa after a road trip from Parc Safari to Toronto Airport, a 14-hour flight aboard Ethiopian Airlines to Addis Ababa. From Addis Ababa, Ethiopia, they flew to Harare, Zimbabwe, where they have met the Imire and The Aspinall Foundation teams who transported them overland to their new home at Imire.

”Once in Imire, Kumbe and Jabari will spend 60 days in a quarantine boma to allow them to acclimatise to their new life under the African sun. They will also practice chasing a lure and prepare for their first hunt. Upon release from their quarantine boma, they will move into Imire’s 4,500 hectare reserve. At that stage, their natural instincts will kick in. We will monitor them closely and provide them with supplement if necessary”, explains Nathalie Santerre, Zoo director at Parc Safari, who prepared the cheetahs for this exceptional journey.

It is no coincidence that Zimbabwe will be the new home of the two brothers, for the species is especially threatened in this African country, with a dramatic fall in the wild population over the last few years.

Since 2013, Parc Safari contributes to the Species Survival Plan (SSP), a pan-American program to breed cheetahs in captivity. The initiative was established by the American Zoo Association to maintain and maximize the genetic diversity of animal populations.

There are only four zoos in Canada accredited by Canadian Association of Zoo and Aquarium (C.A.Z.A), who have the privilege to provide homes to cheetahs. In fact, the birth of Kumbe and Jabari owes a great deal to the mutual partnership between Hemmingford’s Parc Safari and Toronto Zoo.

Cleo arrived at Parc Safari in december 2016 from Toronto Zoo to be part of the conservation and captive breeding program. She proved to be an excellent mother by delivering 4 healthy cubs: Asani, Dalia, Kumbe and Jabari, in July 2019 and raised them to be strong and confident young cheetahs. Parc Safari is extremely grateful to extend its mutual partnership with the Toronto Zoo beyond captive breeding and move forward with the rewilding of kumbe and Jabari to Zimbabwe.

Since July 15, 1972, over 13 million people, young and old, have discovered and enjoyed rediscovering Parc Safari.

Its mission is to protect endangered wildlife while providing people with a unique experience for the whole family, combining fun, learning and awareness. Parc Safari is home to over 500 animals from all continents, and is looking forward to celebrate its 50th anniversary in 2020.

Much more than just a zoo! Come discover the only place in Québec where you can walk among African animals and explore the Feline Tunnel, the Afrika Terrace and the incredible giraffes’a unique attraction in North America! Cool off in the Aquapark l’Oasis Tropicale and try out the Nile River. 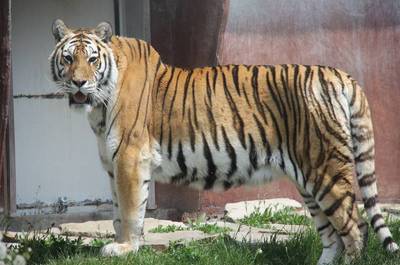