As part of the Espace pour la vie holiday program, the Planétarium Rio Tinto Alcan is very pleased to present for the first time in Québec the film Voyager: The Never-Ending Journey, which has won several international awards.

On December 22, the Planétarium team will also provide live commentary on the launch of the world’s largest space telescope.

Voyager : The Never-Ending Journey tells the gripping story of the most remarkable space mission in human history.

In 1977, two space probes were launched to explore the most distant planets in the solar system.

These ships have greatly enriched our knowledge of far-off worlds.

After four decades, they are now exploring interstellar space, carrying with them a message, engraved on golden records, intended for extraterrestrial civilizations.

These records, which include 115 images of the Earth, 12 minutes of sounds, greetings in 55 languages and 90 minutes of music, are meant to be like bottles into the interstellar sea.

NASA believes that they could last several billion years.

This UMA Vision production allows audiences to fly over Jupiter, Saturn, Uranus, Neptune and their moons as if they were there.

Starting on December 14 – 7 and up – ticket office

On December 22, at 7:20 a.m. (Québec time), an Ariane 5 rocket from the European Space Agency will take off from Kourou, Guyana.

On board, neatly folded and stowed in the rocket fairing, is the largest space telescope ever built in the world : the James Webb.

Please note : Olivier Hernandez, director of the Planétarium Rio Tinto Alcan, was for several years the Université de Montréal’s project manager for one of the four telescope instruments that will allow the study of exoplanet atmospheres.

About Voyager : The Never-Ending Journey

The Voyager mission combines science and exploration. Since 1977, they have provided us with incredible information as they continue their journey into interstellar space.

The film, produced by UMA Vision, allows the public to follow in their footsteps in a fantastic 360° projection.

Espace pour la vie is made up of five major attractions: the Biodôme, the Biosphère, the Insectarium, the Jardin botanique and the Planétarium Rio Tinto Alcan.

Together, they are launching a daring, creative urban movement, encouraging all of us to rethink the connection between humankind and nature and cultivate a new way of living.

Planetarium boasting a spectacular and ecoreponsible design, and an innovative and totally original approach to astronomy. Cutting-edge equipment guarantees visitors a unique experience. In addition to providing astronomical information, the planetarium creates a link between the sky and life here on Earth, not only through science but also through art and poetry. 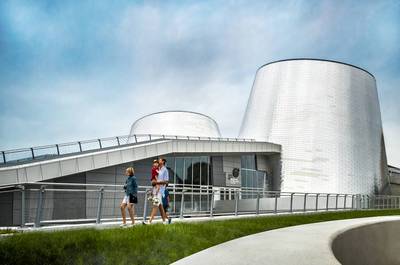